This past weekend I had the opportunity to speak in New York City’s Times Square, during the 99th Armenian Genocide Commemoration, co-sponsored there every year by two Armenian fraternal, charitable organizations — The Knights of Vartan and the Daughters of Vartan, of which I am currently national chairman.

Although I’ve given talks to a variety of groups over the years, this was the first time I spoke in front of thousands, literally; with live radio and web broadcasts around the world; alongside senators, congress and city council members; in one of the most recognized public places in America; about one of the most intense issues of my lifetime: the Armenian Genocide — the 1915 massacre of 1.5 million Armenians by the Ottoman Empire to cleanse its nation of any non-Turkish influence, commemorated the week of April 24 every year.

Talk about the Armenian Genocide to any Armenian you meet, and you will learn that they lost a relative, or perhaps several, in the genocide. You’ll see their face and tone of voice change — you’ll see or even feel the sense of a wound being reopened or re-injured, yet to be healed.

Talk to a Turkish person, and likely they will either claim the Armenian Genocide never happened, or that it was a mere subset skirmish of World War One’s bigger battles. Only now, so many decades later, are some Turkish intellectuals acknowledging the truth — and sometimes getting jailed for it.

The truth is that the Armenian Genocide occurred. It was the first genocide of the 20th Century and the systematic campaign that Hitler cited and studied when preparing for the Jewish Holocaust (“Who, after all, remembers the extermination of the Armenians?” he said to his advisors). And yet despite extensive genocide documentation from Turkish, German and US governments, missionaries, journalists and diplomats in the Ottoman Empire at the time, Turkey has yet to formally acknowledge the Armenian Genocide occurred, at their hand.

What is it like speaking on such a public stage, about something so difficult, that’s been part of your personal and community history for so long? How far do you go? How much do you balance the past-centered frustration and the need/desire to look forward with hope and redemption? How bold do you get, knowing that some crazy in the crowd could be lobbing a bomb at you at any time for what you believe?

All these things raced through my mind as I stood there on the podium yesterday, in front of 2,000 people, in a closed off area between 43rd and 44th Street, near where the New Year’s Eve ball drops every December 31.

Even my family was saying ‘be careful’ about the tough language, the potentially dangerous setting, the risk of it all. I don’t blame them — I was nervous myself.

But as it turned out, the commemoration was one of the most memorable experiences of my life. Seeing Armenians from age 4 to 94, standing together and singing the hymns and anthems we all know and love, remembering our ancestors who stood up and died for their faith instead of caving in to forced conversion, and knowing that the few remaining Genocide survivors living in a nearby senior home were watching — it was so moving, so humbling, yet so empowering. I couldn’t believe I was given the opportunity to be there, to speak, to serve, to stand up for the truth. I will never forget it. 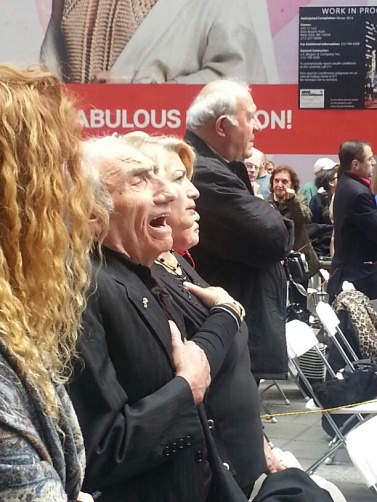 Yesterday taught me so many things, but the following three things most of all:

I. Know your message. Because of various last minute program changes, the time limit of my message kept changing. So I had to keep my remarks short and to the point. But to do that, I had to know what my point was. In this case, I wanted to tell the audience that there are three ways we can honor our brave, faithful ancestors from the Armenian Genocide:

2. Be Excellent – our lives of faith, integrity and accomplishment will be proof the Genocide did not destroy us.

3. Look Ahead – we’ve been given a stretch of road on the bigger path of our history; we can’t sit idly by but must work toward getting worldwide recognition of this important historical event.

What always helps me, also, is to give the whole speech a one-sentence summary — if I only had an opportunity to say one sentence, one thing, what would it be? That will help you refine and focus your message.

II. Don’t be afraid to take the stage. When you have the opportunity to speak to a big group, or at a special event, give it all you’ve got. Don’t mince your words or overanalyze. As one of my colleagues said yesterday: “There’s a difference between giving a lecture and speaking at a rally.” Some speakers yesterday spoke drily, as if lecturing in class. Others roused the audience with their personal stories and passion, with their intelligent take on the historical issues as they relate to our real life today. Guess which approach got more applause, cheers, nods, and tears of pride. Don’t be afraid to get out there and make yourself heard. And if there are follow-up interviews afterwards, keep the same energy and tone in your answers for a unified approach. They want to hear from you!

III. Tough talk can still be done with grace. The feedback I got from several people (thankfully!) is that I struck the right tone of sharing the hard facts of the past while still presenting a picture of future hope — challenging material but spoken from the heart, so that people cannot help but listen and relate. It’s a tough balance to strike; if the grace is not there, it could sound either too flat or too angry. But it can be done.

Giving speeches can be hard — the immediacy of presentation and reaction can be overwhelming — yet it is some of the most gratifying work you will ever do. But it doesn’t mean much unless you have something meaningful to say. The moments we have in life, as writers/speakers/people, when we have both a passionate message and a large audience to share it with — this is precious, indeed.

1 thought on “When The World Listens”