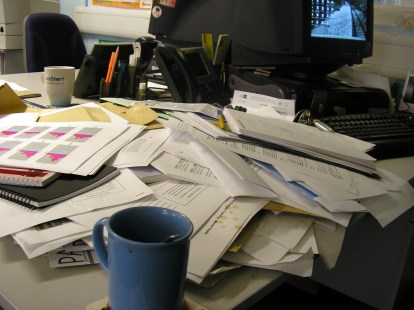 My husband Steve trained as a scientist before becoming a high-level consultant for biotech companies. Yes, about 180 degrees from my professional world, but that’s the spice of life 🙂

But when God gave us two children and our already-cluttered lives took on an even greater load of messes and piles, and when the girls are eager to start a craft or a board game on the already-loaded kitchen table, Steve says: “We need to do a line clearance.”

And of course I roll my eyes — here’s the scientist lingo entering our lives again. But I also love how he applies his complicated field to everyday life.

A term used in manufacturing and lab work, Line Clearance means a segregation and cleaning of different processing and work areas to avoid cross-contamination.

Clean up one project/mess before you start another one. 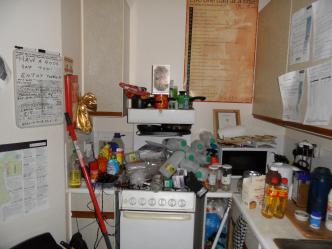 And boy, does this apply to our lives in more ways than I often admit. The other day even I had to admit that a line clearance was desperately needed — a cleaning and clearing of our kitchen table, our ‘financial’ table, our laundry table, our “life” table — before I could get to work on something new.  If I didn’t, I’d lose track of all the loose threads in my life and be far less productive.  Line Clearance helps clear not just the table but the head, and the creativity, too. (Of course I’m compelled to mention that these pictures are NOT of my house!)

And as a writer, I’m sure we can all relate to the idea of finishing one project before we finish another. Getting that languishing draft or deadline done, once and for all, before we allow our new idea or project take center stage.  I’m dealing with this right now, even though it’s tempting to move on to the next exciting honeymoon stage with a new story, I have a few that absolutely have to get done. 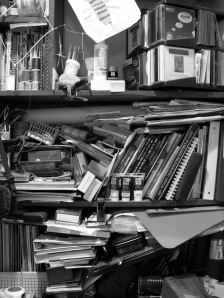 In Syd Field’s books on screenwriting, he often remarks that one of the most tricky forms of procrastination that comes to writers is GETTING A NEW IDEA. Ironically, when we’re stuck in an Act Two structural problem in our script or story, it’s amazing how our brain will sometimes start veering away from being responsible and say, “Hey! I have this burning new idea! Let’s work on THIS one instead!”

Funny how our psyche plays tricks on us. And sure enough, we’ll get to Act Two of THAT idea, get stuck again and get enamored with yet another idea and, it starts all over again.

But if we keep Line Clearance in mind — in life and in writing — we’ll see one project through before we allow ourselves to get involved in another. True, sometimes we have to juggle multiple projects, but you know what I mean.  Clear the brain, clear the table, clear the inner and outer mess, to make room for the next big thing.