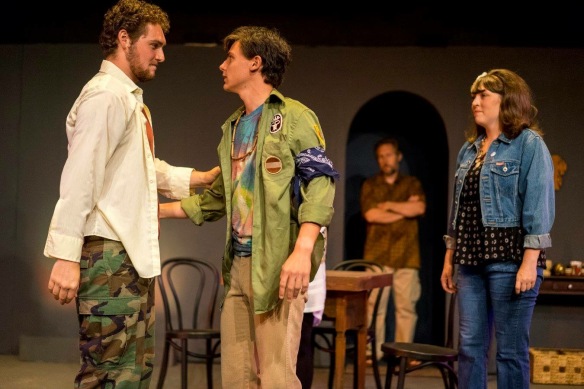 My new play, On Air, which I blogged about earlier this summer, received a wonderful production at Scripps Ranch Theatre, San Diego, in July 2016, produced by Robert May.

I’m happy to feature here a review of the play by San Diego-based writer, artist and professor Mindy Donner.

ON AIR
Scripps Ranch Theatre (SRT) presents the 5th Annual OUT ON A LIMB:
New Plays from America’s Finest City 2016

ON AIR is one of those plays informed by and telling about the Viet Nam War
era, and they get it right! “They” are the powerful playwright, Lisa Kirazian; director,
Liz Shipman; their fine cast, and the tech folks at Scripps Ranch Theatre.
The plot takes us along the journey of a dedicated educator, writer and on-air
producer of a reader’s theater hour at a local east county, San Diego radio station. The
entire production echoes and amplifies the eidetic quality of the writing, and that of our
central character, Gary Gordian, a community college professor who believes not only in
his students, but in the transformational possibilities inherent in delving into great works
of literature. 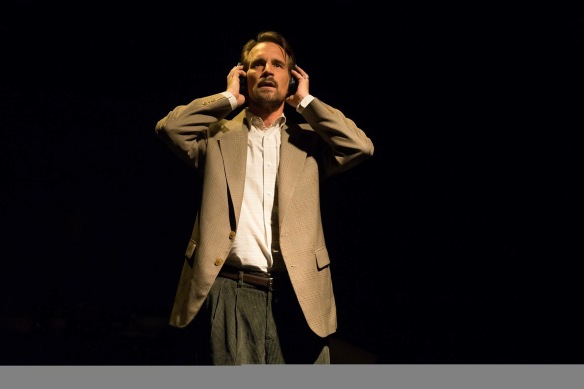 Gary Gordian’s character and story is based upon and inspired by a real-life Gary
and his wife, Siran. Francis Gercke’s Gary was so believable and passionate that I could
hardly believe he was cast just two weeks prior to the opening. This is a great love story:
the love of Gary for Siran, a poetic seamstress who emigrated from Beirut; her love for
Gary and family; and Gary’s love of teaching the great books to a cadre of students
with limited resources. Siran, as played by Mariel Shaw, is graceful in all aspects,
shimmers with an ethereal beauty and has a core made of steel. 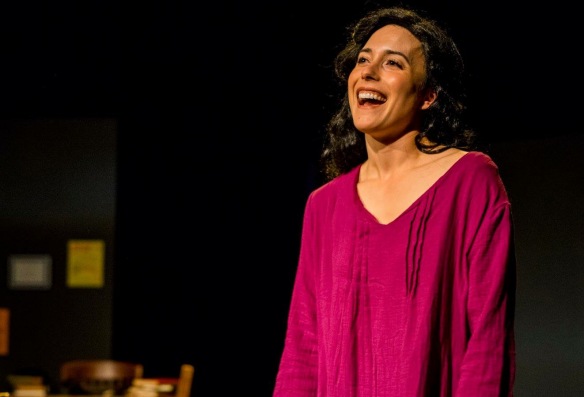 Throughout the play, the pervasive thread is that of Gary longing for “greatness”–
to be a successful writer, to teach at Berkeley, to earn a real salary–and that of Siran’s
longing for home and family–her need to stay in one place close to extended family.
Siran’s rather old-world brother, Van, is asked to not visit after a boorish evening at
dinner at which he orders his sister around and around! Van is performed by Carlos
Angel-Barajas, who takes another turn as Juan, a Spanish writer with whom Gary has a
meaningful correspondence. While Juan is a more empathetic character, it is revealed
that Van wanted to be a priest, rather than a banker. No character is allowed to be one dimensional in this production.

And that is not the only relationship which becomes strained and frayed—Gary’s
“friend” at the college warns him that he is up for review and suspected of altering
students’ grade in order to give them a military deferment. Charles Peters is jocular and
almost despicable as Ben, fellow professor—who is on the make with his female
students. Gary’s radio station threatens to cut his show, as the listening audience for
“great books” in San Diego is on the wane. Disillusionment threatens to take over Gary’s
soul, if not livelihood.

The stage, which is long and shallow, is deftly designed into smaller focus areas
which become Gary’s college office with desk, his tiny writing study, the Gordian’s living
room, and offstage is quite believable as their bedroom. This suited the play, and the
acting within to a tee. Kudos to Bob Shuttleworth, scenic designer, and Liz Shipman,
who envisioned the perfect world for this play. 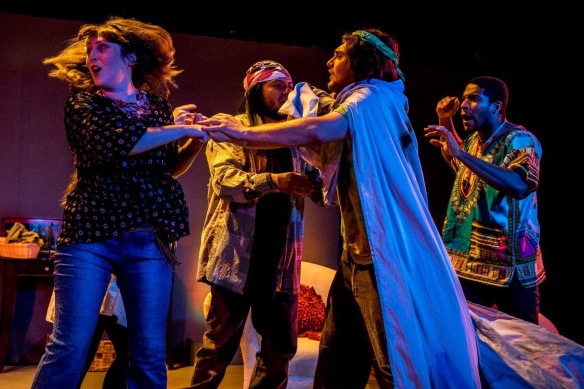 Gary’s college students were delightful with earnest longings, confusion, angst
and all that students really experienced during that fateful era. Robert Bradvica, as
Steven; Michael Crosby as Mitch; Christopher Torborg as Shay, and Michelle Marie
Trester as Abbey/Toni—all were praiseworthy.

Gary gets his opportunity to take a job at Berkeley; Siran almost dies bearing their
child; and they transform into people who now know what is most important.
Siran realizes that “home” is where Gary and their child reside. Gary knows he is
committed to teach these community college students, who truly need him.

The delicacy and beauty of Siran in the “hospital”, a chair, her child which is
birthed from a blanket folded just so, and nurtured by mother and father, and Siran’s
Armenian dance of joie de vivre to follow are traces of director and choreographer Liz
Shipman’s imaginative fingerprint on this production.

This memorable and inspiring production needs to be mounted again for a longer
run, so that more audiences can enjoy this work.

Thank you, Mindy. Thank you, director Liz and cast. And thank you, producer Robert May and SRT!

(all photos by Darren Scott)