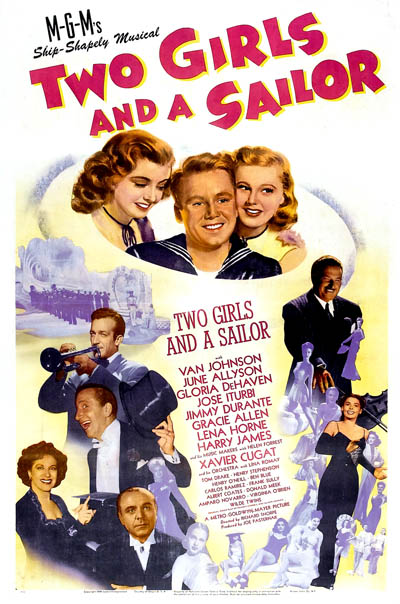 One of my favorite films growing up was Two Girls and a Sailor (1944) — one of the many MGM musicals I obsessed over as a kid, re-enacting scenes, songs and dances in my garage for hours on end.

Long before the film was available on VHS or DVD, my folks got me the soundtrack, which I memorized. 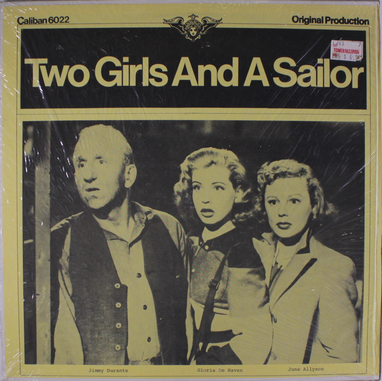 About two sisters who spend their life performing on the road until they start a war canteen and connect with a sailor with a secret background, the film featured nearly every popular comedy or musical act of the time: Jimmy Durante (above photo, left), Gracie Allen, Harry James, Helen Forrest, Lena Horne, Xavier Cugat and Carlos Ramirez (who’s the reason I request the song “Granada” from any mariachi I can flag down at any and every Mexican restaurant I’m ever in.) 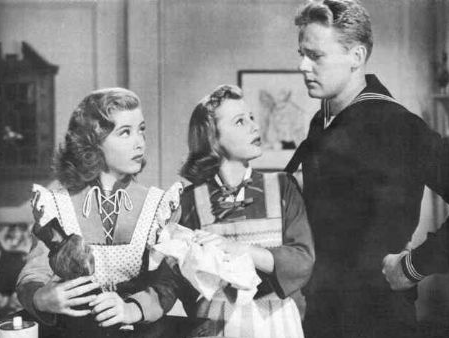 Two Girls and a Sailor starred the adorable Van Johnson, and two of my favorite musical actresses who would star in a few films together: my first idol, June Allyson; and Gloria De Haven — who died this weekend at 91. 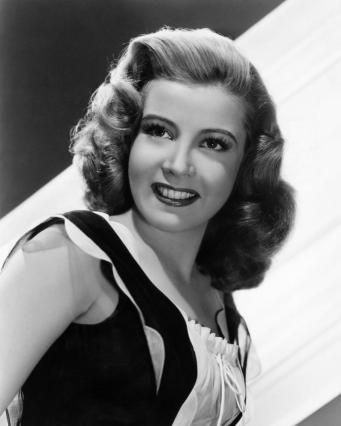 The daughter of vaudeville performers (she even portrayed her own mother in the MGM musical, Three Little Words, singing “Who’s Sorry Now?”) Gloria DeHaven was stunning, sweet and talented. She performed in movies, plays and television for decades (Gloria DeHaven on IMDB).

And with her passing, all the lovely and memorable performers from this film are now singing in the heavens. 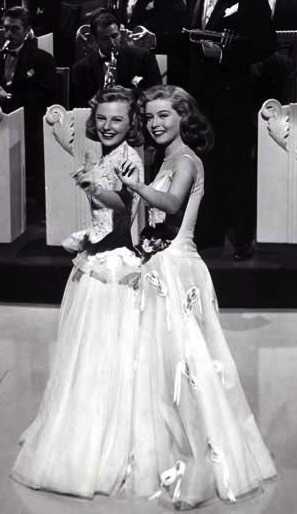 And so goes a little more of my childhood.

But two months before I got married in LA in 2000, just before relocating back to my hometown, my sister and I noticed an ad that a group of the great MGM performers were coming to the Pasadena Civic Auditorium to sing and reminisce about the golden age of musicals.

On the bill, among others: June Allyson and Gloria DeHaven.

Despite the wrinkles and grey hair, they smiled as brightly as they did 56 years before. They held hands to steady each other as they went onstage slowly – because even dancers’ legs don’t last forever. But it was beautiful. They told stories, laughed, harmonized a few vocals to music, and even did a little softshoe. 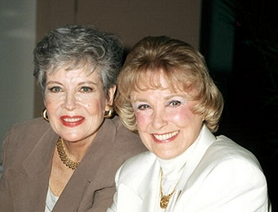 Even more unforgettable was that we got to say hello to them afterwards. We were excited as kids again, and they seemed to love being remembered and saluted so many years later.

There was no time for a picture in the pre-smartphone era, but we’ll always treasure the memory — particularly so today. Today…I’m reminded that we are to sing, dance and smile every day we can. 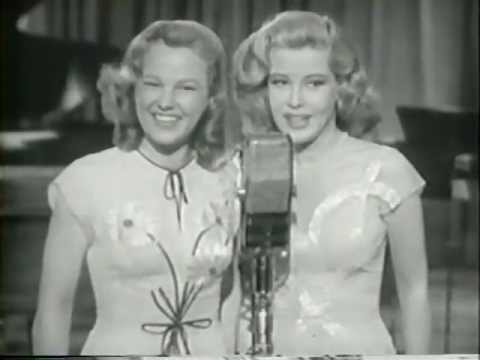 No, I’m not trying reverse psychology so that the powers that be will one day reverse course and give me one.

This is not a lament. There was never an illusion of entitlement. I’m just sharing a series of recent, interconnected revelations that have brought me a lot of peace.

I’m never going to win an Oscar, and in addition to the fact that I’m a far-from-perfect writer who’s still trying to get my ‘big’ works produced, here are the other reasons why it’ll never happen — and why it’s okay: END_OF_DOCUMENT_TOKEN_TO_BE_REPLACED 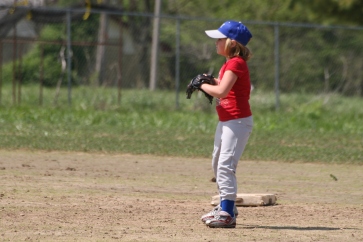 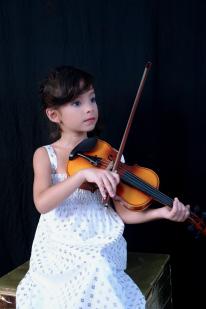 On days like the Super Bowl, as fun as they are — it’s hard for working/struggling artists not to shake their head, at least a little, about the millions, even billions, of dollars worshipfully spent on sports. It’s hard not to think about all the kids who could get music funded in their inner-city school, or who could be inspired by their first museum or play on a school field trip, with such money, if only a portion were directed to different values and priorities.

But at the same time, for someone like me, who grew up with both the arts (playing violin and acting in plays) and sports (playing softball and watching pro baseball), I can’t help but think about how connected they are, and how rich life is when we embrace both.

The arts represent our vision for life here and beyond; our dreams and destiny; our realities and ideals. They accomplish this with stories and songs, images and characters that capture our world and our lives as nothing else can.

But the arts are not just about the actual stories/images/sounds presented; they are about how our own lives relate — the story, painting or symphony helps us think about our own situations, choices and needs differently. They show us another way to deal with things, just when we thought there was no other way.

Similarly, sports is a performance, with an audience. It’s theater, with its rituals, sights and sounds. It’s often poetry in motion. And at its best, sport is about showing people excellence. Like the arts, sports are never just about sports — they, too, are about the people behind the game: their hearts, minds and characters, their families, illnesses, the challenges they’ve overcome, the way they keep coming back. Sports are about finishing well. And as we watch, we think of our own lives, our own obstacles. A great performance can remind us that we, too, can make it through if we perservere.

At the end of the day, both the arts and sports are about overcoming conflict: both are about man versus antagonistic forces, and how he deals with those forces. How he learns and grows from them, whether there is a victory/happy ending or not. Both take us on a journey where we are eager to find out what happens at the end.

Artists can learn much from the boldness and discipline of professional sportspeople — how hard they work, how they faithfully stick to routines to reach benchmarks of success, how they work within a team and respect their peers and leaders instead of being their own island.

Similarly, athletes and coaches can learn much about themselves and others when they embrace literature, art and music. They can learn how to understand people vastly different from themselves; how to recognize, empathize, and deal with any type of personality or situation; how to encourage a peer with a timeless quote and bring the best out of them — all invaluable assets when you are on a team.

Perhaps that’s also why stories or movies about sports have been so memorable and compelling — because they combine the best of both worlds. John Updike’s essays on Red Sox slugger Ted Williams. Films like Chariots of Fire. Rocky. A League of Their Own. Brian’s Song. Rudy. Name your favorite.

People, ultimately, want to be inspired. They want to see their fellow man/woman at their best, so that they can be reminded of what’s possible for themselves.

Finally, both the arts and sports are about surrendering to something beyond ourselves. Whether we are dedicating ourselves to God, a team, a production, a message, or any big-picture purpose, we are most fully who we were meant to be when we devote ourselves to a purpose larger than our little sphere of life.

The arts and sports both remind us of that.

Anyone who knows movies knows that the brass section of the Warner Bros. Studio Orchestra was like no other. Whether scoring a Bugs Bunny cartoon, Bogart film or Errol Flynn swashbuckler, their trumpets are instantly recognizable, and warming to the soul.

Like in Yankee Doodle Dandy, the 1942 James Cagney film that won him an Oscar for Best Actor portraying the song and dance man and Broadway actor/composer/producer, George M. Cohan — who crafted the famous songs Grand Old Flag, Over There, Give My Regards to Broadway, and of course the title song. The above scene is one of the greatest musical dance numbers ever put on film.

Here on this July 4th weekend, hearing those heralding trumpets again, and through all my years, I was reminded how special this film has been to our family in so many ways.

My mother always says that when I was just a toddler, I’d get up on the piano bench during the famous scene above, and I would start dancing with glee on my face.

As a bigger kid, I’d practice and practice this dance routine in the living room or garage and imitate it best I could — as well as the final scene when the elder George dances down the stairs of the White House after receiving the Congressional Medal of Honor from FDR:

Then as a pre-teen, I was struck by what a bratty stage kid young George was, and how his arrogance hurt his family’s opportunities on the vaudeville circuit. And yet I loved how wonderfully kind and humble he became later in life, with the right discipline, guidance and wisdom from his family and friends. Strong yet gentle. It made me think of my own parents raising us while juggling so many demands — their example, and Cohan’s, made me want to be a better writer for the stage myself, and a better person.

Later, the film shaped my view of our country, of how art can touch people in times of crisis, and how our personal integrity and loyalty to family are far more important than our success.

And finally, now more than ever, watching it with our daughters, this film reminds me that I’m so grateful for the freedom to live each day that comes our way, to worship God, to celebrate together as family and friends on weekends like this, and to share the truths that matter most with our precious children.

My mother thanks you…

My father thanks you…

My sister thanks you…

And I thank you…

One of my greatest holiday joys over the years has been the collection of films we’ve enjoyed as a family. These films were part of my moral education growing up and marked our memories, our growth, our life through the years. True gifts.